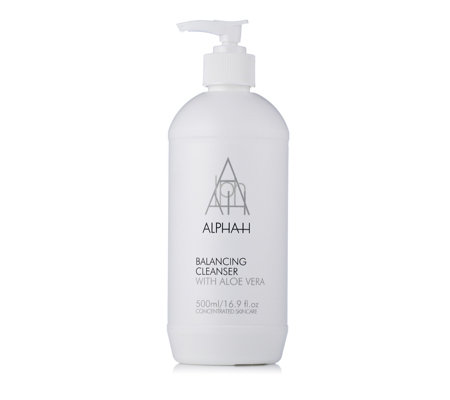 Balancing Cleanser by Alpha-H removes make-up, balances the skin and eliminates the need for a toner or make-up remover. A fantastic soap-free cleanser to softly hydrate your skin while removing dirt, make-up and impurities.
Contains:

Pioneering Australian brand, Alpha-H skincare combines active natural ingredients and the latest in scientific technology to bring a range of skincare and anti-ageing products that will help you achieve a brighter, smooth and visibly more radiant complexion.
Print this page

Rated 4.6 out of 5 by 67 reviewers.
Rated 5 out of 5 by MonaM Best cleanser I have used Liz Earle for quite a while but after trying this I would never go back. The best makeup remover/cleanser and toner I have ever used and I have tried hundreds. Removes all traces of makeup and leaves my skin feeling soft. February 10, 2016
Rated 5 out of 5 by Dimps64 Best 3 in 1 cleanser I ordered this item after attending the QVC Beauty Bash in January and was lucky enough to speak to Michelle the CEO of Alpha H. I told her how impressed I was after using Liquid Gold and asked her what else I could try to help maintain my skin. Michelle suggested this product and I ordered it that night. I've been using this product for about 3 weeks and i'm pleased to say that it has enhanced my skin even more than I thought possible. I've had a couple of breakouts and this has helped to shift them really quickly. My skin is so soft and looks really healthy. It saves time too as it removes make up, cleanses your skin and tones it. I've now let my two teenage children use it and they've been impressed with it too. Love this product. Thank you Michelle for your advice. February 03, 2016
Rated 5 out of 5 by OkyK An amazing product This cleanser has totally changed and improved the condition of my skin. My skin is now far more hydrated, plumper and smoother leaving my once prominent pores barely noticeable after many years of prominence. Thank you AHA and QVC. January 28, 2016
Rated 5 out of 5 by Luckychick Great cleanser I have been using this for almost a year and would recommend it. I have problematic skin; prone to breakouts and dryness. This cleanser is wonderful. I have not had breakouts for a while and it has not dried out my skin. Only downside is the pump action does not work properly after a while. December 29, 2015
Rated 5 out of 5 by Kc1970 Fabulous Purchased as part of a TSV for myself as a regular user of liquid gold. Had been using L/E cleanser but thought as on offer would give this a go. I'm 45 have an oily t-zone & get the odd breakout at the time of the month. I haven't had one spot since using this so invested in another bottle for my teenage sons bathroom & in 3 days his hormonal spot prone skin is clear just amazing!! It's not drying which you would expect from a product which tackles any oily skin issues & removes my foundation & makeup brilliantly but I still use floracil to remove my benefit mascara. Would highly recommended. November 29, 2015
Rated 5 out of 5 by valpac Amazing Quick Results Just received my cleanser last night started using immediately can't believe the difference in my skin already. I have dry skin and my foundation did not sit on my skin especially in the Tzone as it was flaky on my forehead and around my nose and chin area. My skin is glowing already got a comment on my skin already. Took the advise of the presenters as all the experts say for good skin its starts with the cleanse. The only down side is the cost , converting to euro, but it is 500ml so I expect it to last me at least 5-6 mths as a little goes a long way. November 03, 2015
Rated 5 out of 5 by Lizzy2504 Blown Away I received this cleanser in a TSV 200ml size. Anyway I have a 15yr old son and was starting to get the usual teenage spots on the forehead and the nose, I gave him 3 cleansers to try, this one, Liz Earle and SBC, by far the one he loved the most was the Alpha H, I think it was mainly because of the ease of use, you just put it on and wash of in the shower, no cloths needed, I couldn't believe it within 3dys my son spots had all gone, he is so pleased with the results and he has even taken it back to school with him & he even gave me a "thank you" so all in all one Happy family. September 08, 2015
Rated 5 out of 5 by personality Best face cleanser I have been using this cleanser for quite a while. It is the best cleanser I have used and I recommend it to anyone who want to have a clean ski n August 19, 2015
Previous2 3 4 5 ... 9 Next