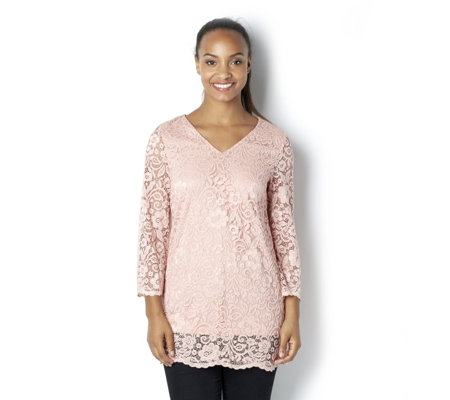 A lace tunic from Nina Leonard featuring a V-neckline, 3/4 length bell sleeves and side vents at the hemline. The longer length of this lined tunic makes it fantastically flattering, while the stretch fit makes for a truly comfortable wear; team with a cardigan and jeans for a casual daytime look, or dress it up with statement jewellery for a night out.
Amazing colours - we're giving you six chic colours to choose from, with two that you may know and love from the brand's core collection (Black and Blush) and four that offer a new and fresh colour palette (Midnight, Cedar, Iris and Blackberry). Pick your favourite or invest in an autumnal rainbow of fashion possibilities.

Easy to care for - the beauty of this lace fabric is that it's machine washable, can be tumble dried on a low heat and requires little ironing… perfect!

Created by Leonard Feinberg and his wife Nina, the Nina Leonard design house is now one of the industry’s leading clothing brands. They are dedicated to creating beautifully designed dresses, knitwear and separates in easy care, easy wear fabrics - perfect for women of all ages and sizes.
Print this page

Rated 3 out of 5 by 34 reviewers.
Rated 3 out of 5 by babychops50 shame about the lining i bought this top in the blush and like the colour and the length, however what spoils this top is the fact that the lining doesnt cover the whole length of the top, which for me spoils the shape. The best thing about this top is the shape of the sleeves. January 19, 2017
Rated 2 out of 5 by Lilian2 Very disappointing I was looking forward to receiving this as I had earmarked it for a wedding. It is so pretty and feminine, but quite unwearable. When standing the garment is fine. When I was sitting, it took on a life of its own and rucked and ruched up. I have sent it back. December 11, 2016
Rated 4 out of 5 by Matty542 Nice I bought this in XL as I'm a size 18 top. It's a really nice fit and nice and long. The colour (cedar) is very dark and at night can look black but is still a nice colour. I took a star off as there was a massive pull of lace on one of the outside of the arms (quality control?) but I managed to pull it back through but it was very fiddly indeed and is not now noticeable. December 06, 2016
Rated 4 out of 5 by isadora123 lovely colour Just tried this top on,a little disappointed,I am between a 14/16 and thought the Large would suit me better.However as per the other reviews, yes this is a little snug on the hips,I am keeping it as I had planned my outfit for a xmas party perhaps my hips will be smaller this time next year December 05, 2016
Rated 2 out of 5 by pearlover cheap and frumpy Very disappointed, the lace looked cheap and nasty, the sizing was very snug over tummy area, and the colour (purple) was a bit washed out. Sent straight back. November 16, 2016
Rated 5 out of 5 by ellie4149 Simply stunning I bought this as a TSV in the Raspberry colour it's absolutely stunning, I'm a 14 in M&S and I'm 5ft 6 if that helps with sizing , I ordered a medium and a large as I was unsure of the sizing with this range. Both sizes fit well across the shoulder and the bust area but as I have a steroid tummy I decided the large was more flattering. I'm so thrilled with it I ordered it in Blush which arrived this morning, I'm very happy and would highly recommend it October 25, 2016
Rated 3 out of 5 by Em01 Disappointed Ordered black and blush in xl, (14/16 high street) size was ok not clingy and the length was perfect, but the blush colour was not what I was expecting or hoping for. I wear alot of pink but this blush made me look ill, I also thought the lace wasn't as nice as other designs I have bought from qvc which was a shame because I liked the style and length of the top. Have returned both. October 21, 2016
Rated 3 out of 5 by Passionista Good fit, weird colour I ordered the blush in a size small and had no problems with the fit but was very disappointed with the colour. The online photo appeared to be reminiscent of a light pink champagne and even the video footage suggested a soft dusky rose - both of which normally flatter my complexion. Unfortunately I have to agree with earlier reviews about the colour as what I received appears to have more in common with smoked salmon and just makes me look ill. I'm currently yo-yo-ing as to whether to to cut my losses or exchange for another colour but either way this one is going back! October 19, 2016
2 3 4 5 Next